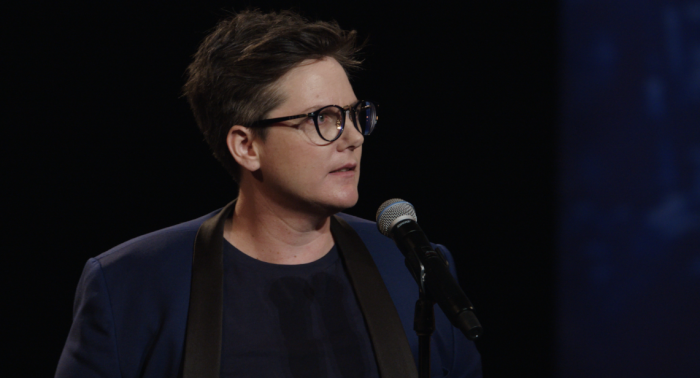 I Don't Want to Be Funny Anymore: Hannah Gadsby's Nanette

“Lately, I’ve been feeling like the odd man out

I don’t want the joke to be on me…

I know it’s a first but

I don’t wanna be funny anymore”

I’ve been listening to this song by Lucy Dacus over and over again. Not only is her voice the perfect combination of haunting and mesmerizing, but I’m also trying intensely to justify how I find myself in the lyrics. Because, the thing is I do want to be funny anymore. I want so badly to squish myself up and crawl into that smaller, more convenient space I used to occupy.

It was so easy for so long to turn this pain into humor. But today if I tried, I would end up with a depressing jag about chaos and coping mechanisms, and the futility of tying my worth on this planet to my top five most recent accomplishments minus my top 15 most recent failures. I know, because I have tried to be funny and I have ended up with that instead and I hated it.

I hated the hard edges and awkward angles. I hated how much of me it showed and how little of it was rewarding. In any sense of the word. I hated how reading it made me feel ashamed of the deep, unending neediness pouring out everywhere without humor to mask it as performance. Without humor to hide behind, to belittle it’s largeness, it’s meaning.

Everybody’s already written their thinkpiece on Hannah Gatsby’s Nanette. That’s about when I started to write this one. But I’ve been trying to braid this combined wonder at her perfectly executed post-modern display of narrative performance, my own struggle with some of the same themes she addresses in her show, and the fact that I don’t know what to do anymore.

Writing was easy for me because I used to know how it worked. I knew the response I wanted to evoke, the concepts I wanted to convey, and I knew the buttons to press to get the things I wanted out of the world. Acceptance, support, understanding, love even. Things I was never freely given; things I had to earn or steal.

And I got really good at it. And I loved it. And if I physically could, I wouldn’t change a thing. Because now I’m just a quivering jello of a human without anything I used before to keep that inside, or at least to decorate it nicely for public consumption.

But I’m done with being consumed. And I miss it so much.

I’ve lost the container for this mess that I previously only allowed to seep out in attractive, packaged ways. Like humor or queerness or being a Type A control freak, but only in a cute way. Only in an aspirational way.

Not in the way that saw me alone in the kitchen, eating over the trash because any bite now, it’ll all be too much and I’ll pitch this full meal into the garbage because I don’t deserve this food. Not in the way where I physically can not speak to my husband when he speaks to me because I am down a deep well of dispair and all I can think is how nice it will be when he finally gives up on me and leaves my useless corpse down here to rot.

Marc Maron tells a joke about day three. “What about day three?” I’ve been asking myself this over and over. On day 600+ I still don’t have a day three plan. I’ve thrown off this false front. I’ve gone to treatment. I am not for consumption. I am the one who consumes.

And what about day three? I built my house on being easy to consume. Not in the normal ways (I’m notoriously bossy.) But in the ways that notoriously bossy people are easy to consume, in the ways that my predictable, controlling, anxious, needy self fit every place I needed it to fit. Every place it could fit. There are things about me that make no sense, that are not comfortable. Some that tear me apart, others that hold me together.

For example, when I was a child, I did not like it when grown people tried to have sex with me, or threatened they might, or suggested that they would like to. And the thing about people is that there is always room to negotiate. So in return for being difficult to fuck, I became easy in other ways. Easy to leave unatended, easy to avoid altogether. Easy to forget, easy to ignore. Sometimes I used quiet to perpetuate this ease, sometimes I used violence. Whatever I needed to hide my own vulnerability.

What I never realized until it was far too late is that in the negotiation where you are difficult to fuck there must always be someone in the world who is less difficult to fuck. That’s the structure of rape culture. Somebody’s going to get raped, that’s the agreement this society made with rapists when we decided to make jokes about them instead of prosecuting them, when we decided, through this unholy union to keep them and throw their victims away. It’s a bad trade.

We all know the joke about bears. You don’t have to be faster than the bear, you just have to be faster than the guy next to you. And I’m the fastest guy because I’ve cut so much dead weight off me over the years. Personal preferences: I have hardly any; minimum requirements for decency: the most minimal! Hobbies and interests: not if they’re challenging or costly in any way.

Humor is like a crow-bar. It takes all the awkward and inconvenient feelings, incongruous facts, unexpected outcomes of life, especially if they’re painful and it applies pressure to one specific point, breaking you open and letting that shit out from an acceptable place in an acceptable manner. It’s convenient.

And I’ve used that fulcrum to push the parts of me that I want into the world, to show people the important thing I need them to see while hiding everything else somewhere else, somewhere even I don’t go.

They don’t anymore, but when I was really good at this people used to ask me how I did it. How was I so resiliant and my answer is: Do you know that I love rocking chairs? No. No one did. I love them. And I’ve never owned one because they’re damn inconvenient. Bulky, expensive, bad for cats. Terrible chairs for anything but rocking. The worst.

Is that relevant? I don’t really think it is. Obviously, I’ve never thought that knowledge was relevant. But I’m writing about it because without that fulcrum of humor, without that mandate to be strategically consumable, I have no idea what goes first in terms of what should be shown verses what should be ignored.

A special like Nanatte couldn’t have been made 10 years ago. Or, more accurately, performances like Nanette were going on 10 years ago and nobody was listening. Because we could not. Because we were too busy holding together the seperate realities where we know the Great Uncle Danny joke isn’t a joke because he did try to fuck us, but when we hear the same joke about someone we love, we know it has to be. We have a cultural mandate that it has to be.

Even now, I’m naming my Great Uncle Danny and not those men I grew up with because they aren’t mine to name. They never tried to fuck me. By the time we knew each other, I’d become difficult. All I know is what I have said. We had jokes about the ways they treated young girls and we had jokes about the girls who would be careless enough to get near them and that was all. That was how the truth came out. Through humor, through the focus of humor we conveyed what we could and we held back what we had to, what we were mandated to by this invisible force of culture, family and history.

So do I really want to be funny anymore? No I don’t. Not if that’s what it means. Humor has other uses, but it’s been used for this too long in my life. What I really want is twofold.

Firstly, I want the protocol that humor gave me. If I needed to communicate something and I couldn’t do it other ways, if I needed to release something and I couldn’t appropriately get it out, humor became a vehicle for the truth. I knew what to do in situations like this. I had rules and I had structure. It was a shitty structure and I’m glad it’s being torn down, but I can’t drift forever.

I can feel the ground moving under my feet. I can and have been trying different things to come to terms with those brothers from the past, those people I left and say nothing about to anyone. I’ve also been coming to terms with the measures I went to in keeping my own baggage as light as possible, the space I removed myself from, the silences I kept for my own protection at the time, and what it means now that I can protect myself in this way. What is my adult responsibility to my child self?

Secondly, I do want to be funny again. But not in the old way. The answer is not to become serious, it’s to find humor again in ways that don’t perpetuate the cycle of violence, sexual and otherwise, against me and marginalized people like me. And that’s all I know for now.

I hope you enjoyed my Nanette review.